The markets have been extremely volatile lately. We decided to put together some of our thoughts about the current market, and the potential risks we see coming in the near future. We’ll also discuss our investment strategy moving forward so that our investors can be better prepared for the near future.

There are a few salient risks to the commercial real estate market in the short term:

Given the amount of froth in the commercial real estate market, many people have done deals with thin margins. Some of the more dangerous deals that were done in the past few years involved taking bridge debt (short-term debt that either needs to be refinanced or sold) to buy deals at low cap rates with thin cash flow.

Rising interest rates are a significant risk to deals like this; when the time comes to refinance the properties, the cash flow might not be high enough to cover the cost of the new debt at the higher interest rate. In addition, rising interest rates put upward pressure on cap rates, so it might also be impossible to sell these properties at a higher cap rate and still generate an acceptable return.

To get a sense of the interest rate movement, see how the 10-year treasury yield (which is highly correlated with mortgage rates) almost doubled since September:

To elaborate on the cap rate point a bit more, in general, cap rates rise when interest rates rise. If the 10 year US treasury goes up to 3%, it doesn’t really make sense to buy an apartment building at a 4% cap rate when it involves taking a lot more risk over the US treasury.

Basically, the only way that investors could still buy at compressed cap rates in a high-interest rate environment is if they expect rents to continue to go up. This is generally known as capital appreciation. In this case, it might make sense to take a low risk-adjusted return in year 1

knowing that the income will continue to go up over time and make the deal much more profitable down the road.

Finally, the third-largest risk we see is the risk of a recession.

We think the Fed could very easily overshoot how much they raise interest rates, especially because there’s a lag between when they raise rates and when the effects of the rate hike are felt in the economy. We’re already seeing a lot of signs of an impending recession; the most telling signal is the yield curve inversion.

We think the Fed could very easily overshoot how much they raise interest rates, especially because there’s a lag between when they raise rates and when the effects of the rate hike are felt in the economy. We’re already seeing a lot of signs of an impending recession; the most telling signal is the yield curve inversion. 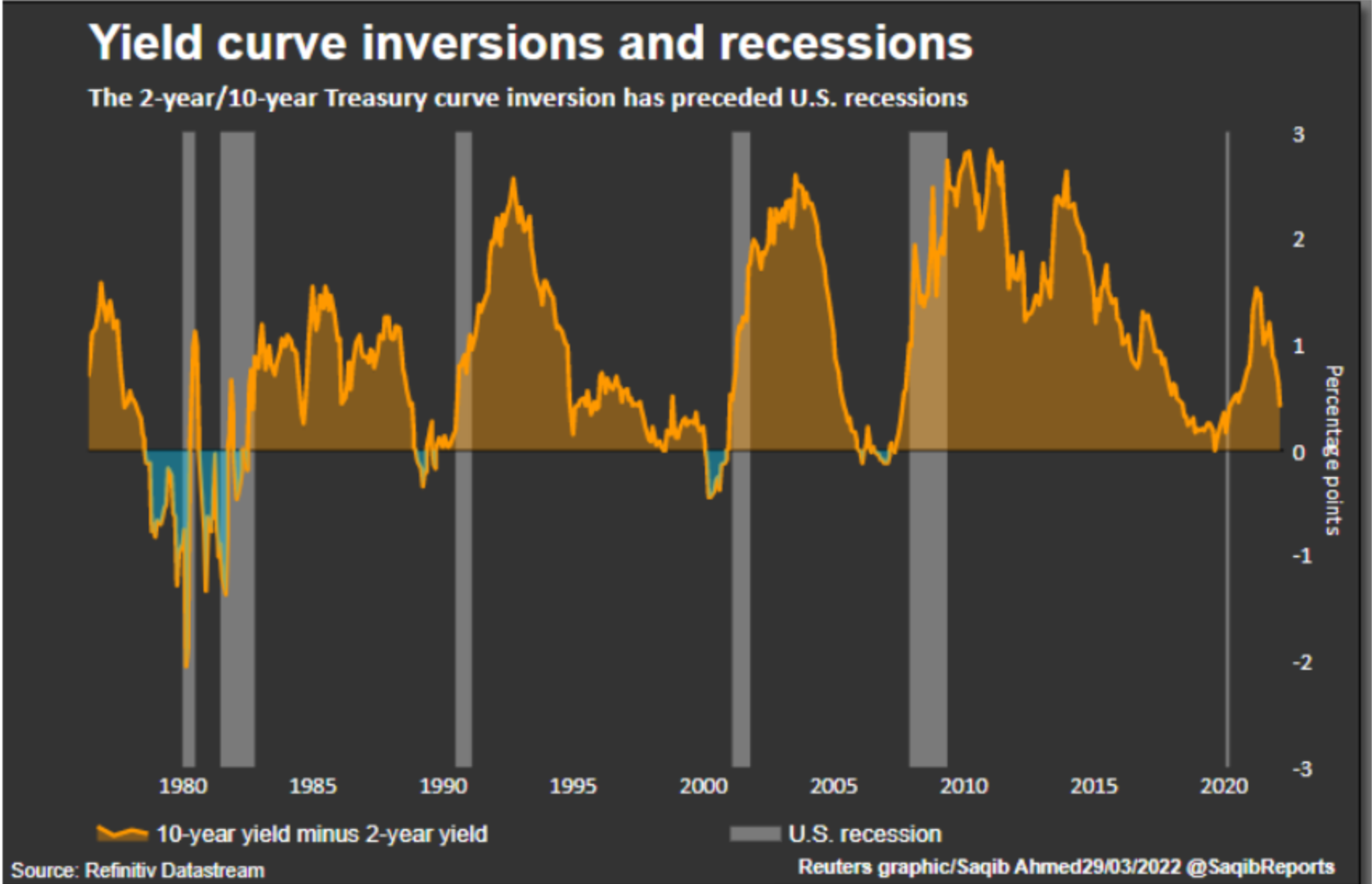 Each vertical gray bar represents a recession. We can see that when the spread between the 2 and 10-year treasury yield is negative (the main yields people look at to monitor for an inversion), it’s followed by a recession.

There’s a lot more to talk about regarding the yield curve, but that could be an entire newsletter in itself. The bottom line is: that whether or not a recession actually comes, we should prepare for one to be safe.

There are a few real estate strategies that we think could mitigate these risks.

The first strategy is buying deep value-add as we did with 923&925 Holden. By adding a lot of value upfront, we build equity into the deal so that, in the event of a market correction, the initial investment in the property is safe. Initial construction costs drive up our need for additional equity in this scenario and generally require short-term financing while the property is under renovation. The benefit of this strategy is a much higher rental income stream upon stabilization.

The second strategy is buying lighter value add properties in A-class neighborhoods with long-term debt. The value add component allows us to get a better deal by not having to compete with funds that buy fully stabilized properties, and buying in A-class areas mitigates the risk of

cap rate expansion. In this scenario, the construction costs are lower and don’t necessarily impact our financing strategies. In market corrections, investors flee to safer assets, which will keep downward pressure on our asset’s cap rate. The long-term debt attached to the asset is eroded by inflation as well, increasing the overall real return of the asset.

We believe for 2022, acquiring opportunities that match the second strategy is preferable to help mitigate the risks noted above. Even though the cap rate on these assets will be lower at acquisition, the erosion of debt due to inflation and the potential future rent growth in these highly desirable areas, and tax benefits work together to still provide a meaningful place to park capital in an inflationary environment.

Let us know if you have any questions or comments! We’ll compile our responses to all the questions and send out a response later next month!